Breaking with tradition here, I’m going to ramble about work a bit - or at least some of the weird effects of working at a university. I’ve been thinking more about them recently, partly because I’m getting old and senile and partly because after 15 years I’m finally going to leave university and work Somewhere Else.

It started a few weeks ago when I left a meeting in the university library and walked across level 4. When I was a student (some 12 years ago or more) level 4 of the library was our territory. It was where the maths textbooks laired, and called us to gather even if we never actually looked at the things other than to marvel at their number and the amount of dust that had accumulated since the last pilgrims had arrived. At that time the floor was filled with bulky computers, with CRT monitors perched atop them like the rock piles in Blair Witch, and laid out in uniform lines which both made economical use of the space and sapped any will to live from you. Now though? Well, now it’s… 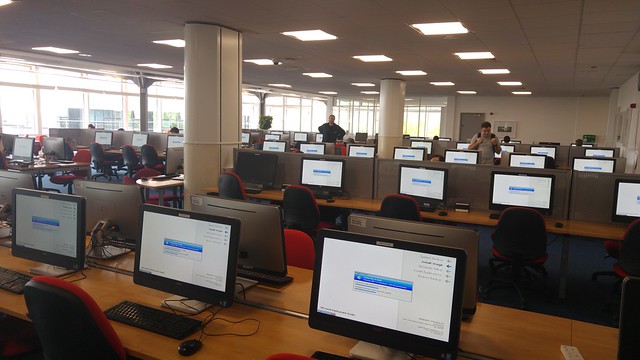 Well, exactly the same really but with more modern tech. The weirdest sense of deja vu. I have to wonder if the Silver Fox is still haunting the place, seeking those students who dare to consume something other than blessed water in his hallowed halls.

This time-bubble warps perception everywhere and our relatively low staff turnover only encourages it. This week is Freshers’ Week, which means hundreds of school leavers are roaming the grounds in an attempt to find the fabled “north buildings”. They are aided in their quest by the returning students and it is so very easy to look at these second and third years and relate to them, thinking “that was me not so long ago”. And yet it was more than a decade since I was a third year student, worrying about coursework and helping run a radio station. I have many friends who have had children - several children - in that time who are now going to school and looking at us as the uncool adults we really are.

It is a frog on slow-boil problem I feel (minus the brain-removed issue those frogs experienced, although…). I haven’t left so I haven’t aged. Despite doing adult things like getting a mortgage, life has failed to convince me that I have become, in theory at least, a responsible member of society and A Proper Grown Up. Maybe it is because I haven’t had that moment, a variant of which I assume everyone else goes through, where I suddenly become my Dad, understand what’s going on in the adult world, learn to appreciate sport and discover the enjoyment in gardening.

Yesterday, I was sitting in the Plug (the student bar) drinking diet coke and MMMBop started playing over the speakers. Aside from the video being projected onto the wall (and the lack of a half-completed piece of maths tutorial work), this could have been a scene from 15 years ago - except I was a bit fitter (although I’m more flexible now - in your face younger me) and had a bit more hair. Fortunately the modern world dragged me back from my time travel experience as the bar audio has a feature which lets anyone add music to the playlist from their phone anywhere on campus.

Back in the day nobody played anything but URB if we had anything to say about it.
Posted by Tom at 21:15 No comments: