My Name In Lights

A while ago I expressed surprise that someone used one of my flickr pictures in their blog post. Well, it seems to be catching - a rare google search for my stuff online has shown that my pictures are popping up all over the place. The most interesting one for me: I'm on Wired!

I suppose I shouldn't be surprised - this is, after all, what Flickr is for. The social and searchable aspects make my (and, indeed, anyone's) photographs available for anyone who is interested and the work done by the Creative Commons license people mean others can use my material. On top of the theory, there are the stories about people whose lives have been changed or saved by various social networking sites. The difference in this case is that, in its own small way, it has happened to me. And that is nice.

The wonderful Play.com gave me the opportunity to have a look at a game that mildly intrigued me when it was released a few years ago (back in 2005). That game was (and is) Dragonshard, which proudly boasts that it is the first D&D RTS. It is so proud of this fact that it is part of the box art, and also splashed across the screen as it loads up. Clearly it is going to be something special then. 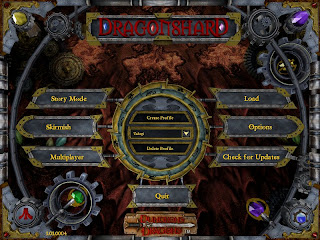 As we first delve into the magic that is going to be The First D&D RTS(tm) the first thing we find is the menu screen. You remember back when DVDs were new and studios felt compelled to make their menus different and interesting? You remember the beauty of the interface to something like Crouching Tiger, where it played exciting clips of the film each time you clicked a button? You remember that that particular feature got old about 18 seconds after you first thought "wow"? Welcome back to that happy time.

The menus are a pain. They have cogs turning in the background in some bizarre homage to steampunk (which is absolutely nothing to do with Eberron, the world where this is all set) and instead of pleasing music or just silence we are treated to the sounds of heavy machinery. Very clever and different, but also deeply annoying - and this is the noise playing throughout the seemingly eternal installation sequence. Even ignoring these audio trials, clicking around is a pest resulting in much scrolling and things moving about and not much actual navigating around the options. 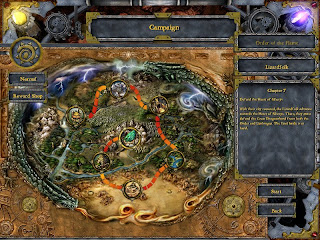 There is one exception, which is the voice over bloke. He is from the "IN A LAND, FAR AWAY..." school of voice acting and when you click on a race on the campaign screen he growls the name of that species in a deeply sinister voice. That alone is worth his fee as far as I'm concerned.

Anyway. After clicking around for what seems to be a week and rattling through the lengthy and tedious tutorial missions you're thrown into the game proper and - there is no getting away from it - it is like playing a poor man's Warcraft 3. The point, click, drag interface is exactly the same, as are the rpg elements where you "interact" with npcs around the map. I use that term loosely as without exception they all say "go kill that" or "fetch me this thing after you've killed the guardian" so it's hardly a work of genius. Even the animation is in the same style - the distinctively comical way Warcraft characters run around by punching forwards with their firsts rather than powering onwards with their legs is copied flawlessly, which is particularly amusing when the main chaps are standing around having a deep plot moment and some npc goon struts up to say his piece.

There isn't really much else to say about the gameplay. Although I say it's like the three years older Warcraft 3, it actually hasn't evolved a great deal from Command & Conquer back in 1995. There are two resource types, which is mildly interesting (and annoying when you realise you can't swap one for the other and you find yourself unable to find any gold) and the troops all have special abilities but otherwise gameplay is the same: control the resources, control the choke points on the map, wear down the enemy, force your way into its base. Repeat. 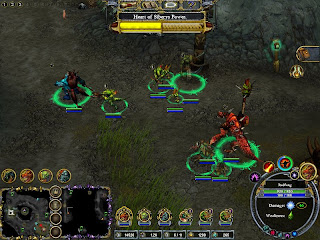 Actually, I'm being a bit unfair. There is a 14 mission campaign (seven for each of two of the three races - oddly, nothing for the third) and there are some interesting maps along the way with some attempts to do something a bit different. The inclusion of Kyber (the underworld - a cave system that runs under the maps you're playing on) is something I haven't seen before, adding a bit of pseudo-dungeoncrawling to the proceedings where you can earn experience points (XP) and gold to boost and build your army.

Army management has gone through an overhaul too. You get the usual Champions (hardbloke special characters) and rank and file troops, but also special units called Juggernauts of which you can build one and send it off to devastate the enemy. Sadly these Juggernauts are not worth the resources they cost to build so I typically ignored them, but still - the option is there.

As you kill enemies you generate XP which you use to upgrade your troop captains, allowing them access to more powerful abilities and also having them drag around soldiers (less powerful versions of themselves) to help and take the hits for them. This initially seemed like an odd decision - you're upgrading disposable rank and file troops rather than the champions who drive the story - and after playing through the game I'm still not sure how well it works. Mechanically, it's great. It means there is some strategy in deciding how to spend the XP and choosing your troops, deciding which extra abilities you want but it is all oddly soulless. Supposedly the magic items are for upgrading your champions, but it still feels weird that the main characters don't substantially change from the beginning of the game to the end.

One thing that struck me repeatedly whilst playing Dragonshard was how dated it all looks. I accept the game is nearly four years old (as an aside, I am going to start writing about more modern games - honest) but that is two years younger than Freelancer and I still go back and play that regularly. Perhaps it is because it takes all the things I hate about RTS games and builds upon them like the tower built on the sandy beach. And the tower is made of sand.

The camera doesn't zoom out far enough, so battlefield control is limited to watching individual skirmishes. Except you can't control the skirmishes very well because switching between units is a pain and the control system isn't precise enough to move troops exactly where you want them (not that they stay there anyway) so skirmishes consist of pouring troops into an area and hoping for the best. This means the micro-strategy involved in any given skirmish is precisely nil, but also the close in camera coupled with the limited resource and population caps stops you coordinating macro-level strategy where you attack an enemy base from two different directions to draw off the defenders or capture high ground to control an area whilst your infiltrators scout out the terrain ahead. I think this is a particular complaint of mine, since pretty much every RTS game irritates me in much the same way but it seems to me that in a real battle the commander is either managing the troops locally in the skirmish or he's delegated that to his subordinates and is coordinating strategy. He's not trying to do both at the same time.

If you want to find some strategy in Dragonshard, you need to look at army composition. You need to find a good selection of troops to put with your hero in your strike force before you either hit your population cap or are buried in an unmanageable mess and just have to click and hope. This means getting a couple of healing units (tip - put your XP into these guys first), a couple of melee units to hold up the enemy and a handful of archers to shoot them to pieces whilst the soldiers are getting chopped up. Of course, once you've cracked that you can win the game without thought, but there are enough unit types to try other combinations. Each unit comes with its own unique special abilities - another one of my personal hates because they all need triggering manually. This means that rather than accepting you cannot affect the coming battle and sitting back to enjoy the visuals, you have to sit there tabbing between the various units trying to remember what all the various abilities do and firing them off properly so you spend your entire life watching your mana metres and looking for targets and ignoring the graphics.

Oh, and the AI cheats - attacking you with horrendously powerful forces before you've had a chance to build anything. Except for the times when it doesn't bother and you can wander all over the map without problems building a DoomArmy to blast through its base - and these differences can occur between different loads of the same levels. Weird.

It goes on, but you've probably had enough by now. Before moving on though, I have to mention the spectacularly poor writing which strings the game together in campaign mode. Each army has a series of cutscenes starring the champions (each side has the same architypes - the leader, the sage, the violent thugish one and the instantly forgettable one) and every scene consists of the leader and the sage taking things seriously, the thugs wanting to smash everything in sight and the useless one quipping in an entirely unfunny way. I have to wonder about D&D games and films - considering the heart of tabletop D&D is roleplaying and storytelling, you'd think these big money productions would have a storyline superior to the sort of thing your halfway decent DM writes in his sleep.

Also, do watch out for the bugs. Even four years on, and after a pile of patches, there are moments when quest items mysteriously vanish. Or it eats your save games. Thanks.

Despite all this I did find Dragonshard quite entertaining (I have finished it, which at the time of writing makes it better than Storm of Zehir - do NOT buy that game). Whilst it is in no way ground breaking, it is inoffensive and not too irritating. You can cruise through it without having to engage too many braincells which makes it quite fun evening play and if you can find someone daft enough to want to play it with you, I'd imagine the multiplayer can be a laugh. Why you'd want to when there are so many other games out there is another matter - I picked it up for £3 because I was interested and was expecting something a bit different. It isn't different.