Warning: this one will get ranty.

At home I run Windows 10 - an operating system I carefully selected and in no way appeared on my computer while I was reading a book. It actually works pretty well for my gaming needs (the only reason it's not Linux) but does have a habit of trying to sell me things or steal all my information.

It also has a habit of dropping massive named updates which do exciting new things like BREAK EVERYTHING.

Recently a huge update landed which I'm going to call the GDPR update. Mostly because I can't be bothered to look up its actual name. When I originally "opted" to install Windows 10 I went through and disabled the inbuilt advertising and random tips on the lock screen because I'm a bit old fashioned and inane nonsense written on screen when I'm logging in just doesn't do it for me. GDPR should only help my desire to avoid advertising - only a truly scummy company would use being forced to confirm my privacy choices as an excuse to turn everything back on and hope I don't notice.

I noticed. You lose.

Special mention for the "send information for diagnosis" option which now lets me choose between "yes, everything and don't forget my passwords" and "only some things". Apparently the older option of "don't send anything" is no longer viable in today's excitingly connected world.

So anyway, I have to choose to not have voice control turned on. No really, really really, please die Cortana. Then maybe my mic wont be on permanently listening to me. It appears it is indeed off. PERMANENTLY. Along with ALL MY SOUND.

Grr, rage, etc. This is revenge for disabling advertising, isn't it?

Anyway, the sound has died before and was a pain to fix both times, so I thought I'd document what I did for the next time this happens. The symptom: output seems silent. On closer inspection there does appear to be sound coming out of the card, however even with the output boosted high it's very tinny and quiet. Many people find problems in their Sound menus (volume being dropped to nothing, device being disabled) but I had a different issue.

My card is a Soundblaster SomethingOrOther, which has a separate config screen called the Creative Audio Control Panel (which I had to reinstall to get working, incidentally). On this panel there is a Headphone Detection tab, which has options to make the device change behaviour when headphones are connected. This seems to get locked on for me, causing the muting effect. 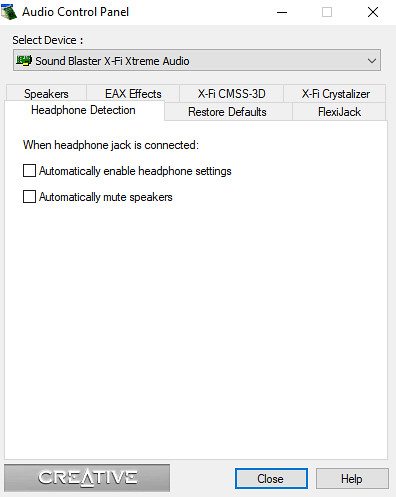 I disable the options and it all works perfectly again. I've done this before, however the Windows 10 upgrades sometimes reset these options. Thanks for that. I've experienced this same problem with a Realtek card and the fix was the same - Realtek has a similar control panel.

Now for the microphone which is a new and exciting problem. It seems that because I've asked Windows not to let Cortana listen to me all the time, it has interpreted that as "for the sake of my privacy DO NOT ALLOW ANY APPLICATION TO USE MY MICROPHONE". Which is ... extreme.

Anyway, this new option has gone a bit mad and disabled access from everything and sanity needs restoring. The new button is hidden in the Privacy menu, selecting Microphone from the left menu. 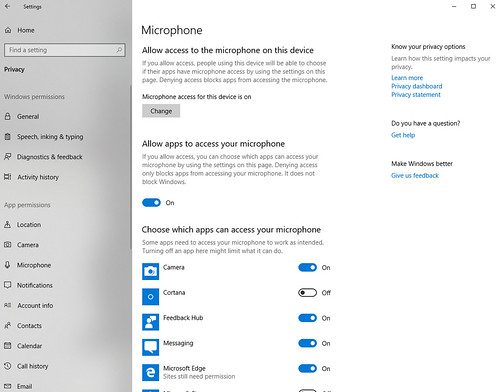 So things are back to normal. I wonder what will break next? And I wonder if my next ranty post about operating systems will be about how annoying Windows is, or how much I hate OSX? If anyone is placing a bet, I've just had to reinstall Homebrew...
Posted by Tom at 19:45 No comments: