I've been playing a lot of Valheim with my gaming group. We've been taking it slow, focusing on building and careful exploration rather than boss murder and so we built up a pleasant homestead. It doesn't touch some of the crazy things that people have been building and posting online, but it was far more than functional and, after spending many hours in and around it, it was home.

Valheim is still early in development so major patches drop from time to time and when they do the developers recommend a full server reset to avoid problems upgrading. Sigh - it's annoying, but the price of playing Early Access games.

Anyway, our home was going to be nuked along with the rest of the world and I decided to make a video before it went up. Great idea! List the problems!

Well, it makes for a blog post. So here it is - the absolute basics on how to record and edit Valheim videos. If you're just interested in the video, skip to the end.

Moving the world to your local machine

Firstly - the freecam is considered a cheat, so it will only work on a local server. We play on a hosted server, so this means transferring The World from the server to local machine. The reverse is a common enough problem with many online guides, but I didn't see any guides from server to local so here it is:

Now when Valheim starts your backed up world should be in the available local options. You may need to adjust the world seed to match whatever is on your server.

Note that this backs up the world, so if you're so inclined you could use this to duplicate items (since you can jump characters between worlds). Of course, you can also just use the console to spawn items then jump to multiplayer servers. I don't advocate this when you're on a public server.

Now we can access the Freecam. To do this, we need some console commands so first enable it by adding -console to the Steam startup options. Now F5 will display the console where you can do all kinds of cheating.

Now you can move the camera around with WASD, change speed with the mousewheel, fix to a point (for a pan) with left click and ascend / descend with CTRL / space. You can also use a controller, which allows for more analogue control if your thumbs are appropriately trained. Mine are not.

This is an overview - more detailed instructions (and full credit) on these reddit posts:

The camera is surprisingly fully featured.

This is the time to pick what you actually want to record. Pick your route, practice your pans, etc etc. Place your character somewhere dramatic-looking and remember you can disable / enable the game HUD with CTRL+F3. This is where you get to be creative - good luck.

With planning in place, the visuals need recording. I used the free version of XSplit Gamecaster. It's pretty easy to set up, but worth noting that recording over 720p embeds an obnoxious watermark. Set the recording to 720p and it can be removed - obviously there is no preset to do this.

I did my editing with Adobe Premiere. I am nowhere near competent enough to offer advice using it, but there are many YouTube tutorials readily available. If you're coming at it cold (like I was) then I did:

The music I used was released under a Creative Commons license and came from Serpent Sounds Studios.

Bringing it all together

After quite a bit of fiddling with the video, I saved it out, uploaded to YouTube, and voila:

It's basic, but I'm actually quite proud of how this turned out. I'm also pleased I've got this record - this land no longer exists and while it is digital, I've spent a lot of time here. I genuinely miss this place - the new one doesn't feel like home just yet.

I find Valheim interesting in a way I haven't engaged with a game in a while. There are loads of great games out there, but the way this one is paced and realised is something a bit different. Maybe I'll write something about that.

In the meantime, here are some holiday photos as we explore these lost lands. 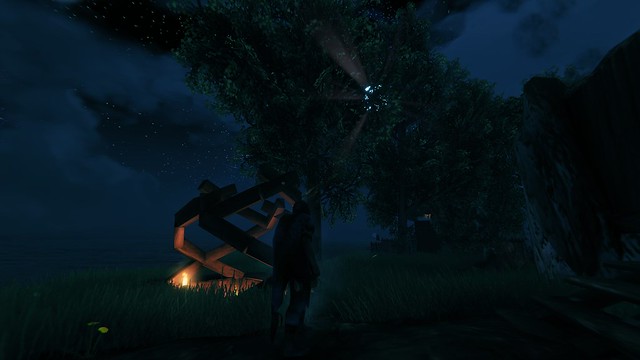