It's dangerous to go alone

I've played Dungeons & Dragons, alongside other roleplaying games, for most of my life. In the last few years I've been telling people that the skills learned from playing (and especially running) this game are incredibly useful in the office. And people think I'm mad.

Firstly, for those who don't know, a roleplaying game is a co-operative game focussed around collaborative storytelling. There are hundreds of different rulesets and different ways of playing those games but essentially the Games Master (GM) tells a story. Everyone else takes the role of a single character (the player character, PC) and describes what that character is doing, and how they are responding the challenges of the world. Imagine telling someone the story Lord of the Rings, but instead of passively listening the audience has control of the behaviour of Aragon, Gimli and Legolas (or, if you don't want to imagine it you can read this happening at DM of the Rings). The GM provides context in the setting and the reactions of other characters. The rules define what the characters can do and gives a framework for testing for success.

There are some obvious skills which are gained by playing. Most of the systems involve some basic maths that needs to be done quickly on the fly, which helps with arithmetic. There are social skills from playing in a group, and needing to work together. There is the creativity of thinking up the details of your character, including their motivations and history and some basic acting involved in their portrayal. In fact, Dungeons & Dragons (D&D) was used as a learning tool in schools before it was deemed Evil for reasons which are too tiresome to explain here.

However, I think there is a lot more to it than this.

Consider a job interview. A very common question is along the lines of "imagine you're working here - how would you respond to X happening?". I've had many conversations with people who find it very difficult to put themselves in a fictional situation, understand the limits of their choices in that scenario, and decide on their actions within that context. It's a pretty unnatural thing to do and something of a niche skill, but is definitely a barrier to getting many jobs. It's also exactly what you are doing almost all of the time in a roleplaying game. Pulling out your dice and declaring you're going to stab the manager probably wont help you in interview, but having the confidence to think clearly and quickly in that environment definitely will.

At the heart of many roleplaying games are the challenges. How do we cross this ravine? Can we get the gem from the sleeping dragon? The realm is being invaded, what can we do? These all boil down to "how do I solve problem X with resources Y?" My career has been in technical delivery and management and this has been the question posed by work every single day for over a decade. Like in the games, the answers have varied enormously, and often involve multiple steps to grow Y or redefine X. Practising these thought processes in a safe environment has been very beneficial to me.

Solving problems in D&D often involves communicating with other people (played by the GM) and that involves thinking about their needs and desires. And now we're practising empathy and understanding - in higher stake scenarios and closer to actual conflict than many of us will ever encounter in real life.

When one is the GM and running the game, all the above is dialled to 11. Instead of a single character to track, there are potentially dozens and you have to remember exactly who knows what and how those people might communicate. This starts to sound like the communication that happens in an office which is very important at times of change, or any time information needs to be passed around.

A large part of running the game involves describing the scenario and keeping the story moving. This involves a myriad of narrative and communication skills, learning when to focus on details and when to skip over for the sake of pace. What's important? What makes things come alive? Being able to tell a story is important at interview, and important for talking about your latest great idea in the office and convincing others of its greatness.

Taking a step back a little, being a good GM involves keeping the game itself moving forward. That means taking a group of people, listening to their thoughts and discussions, providing information where required but also helping them come to a set of decisions. All the while, you need one eye on the clock (unless you really like playing to the small hours and getting nothing done) and to keep monitoring the room to make sure that everyone is included. These are key skills required to run a successful meeting.

I can go on, and probably will at some point in the future. For instance, I haven't mentioned anything about teamwork (D&D is usually impossible if the players aren't working together). I look forward to the day when management training is a group of candidates running through the Tomb of Annihilation.

I think playing roleplaying games has the potential to teach some very positive skills. But if nothing else, it is a good excuse to own a lot of pretty dice. 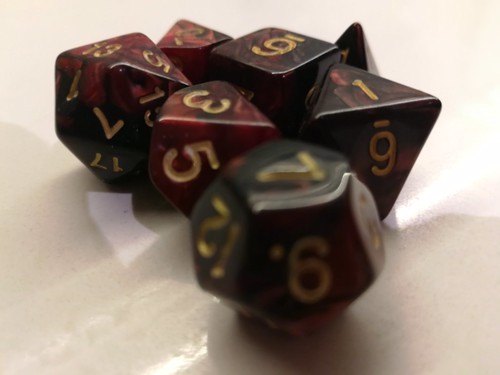