TL;DR - I used CEWE Photoworld and it was good

I have been running a photography website since the start of 2015 and I thought it would be nice to turn the pictures from last year into some kind of coffee table photo book. That's 72 photographs (12 months x 6 photographers) each with title and caption, plus each month needed a cover page, and I wanted the first photo of each month to appear on the right-hand page so I needed another page per month to shuffle the photos on. That's 8 pages per month, for a total of 96 pages to lay out - not a small amount of work so I needed a site which would give me a tool which I could use without wanting to do Very Bad Things by the end of it.

After some searching I ended up using CEWE Photoworld for three important reasons:


The desktop tool is hardly the pinnacle of software design, but it does the job. It is quick, reassuringly responsive and allows text with background colour and limited bulk formatting. It let me put everything together in the way I wanted, including guidelines on where I could push content to the edge of pages and where it wouldn't work. This put it a huge step forwards from Photobox, which I tried first because it is the famous one. Photobox offers a web based application which didn't let me add text with a coloured background and generally had that cumbersome feeling of web applications from last decade.

The Photoworld online help includes a real time chat, which was very helpful. I used it twice. The first agent was very responsive and helpful, answering my questions and generally being very reassuring. The second one was significantly less so - I got the impression he had far too many simultaneous conversations running, and was annoyingly vague when I was asking very precise questions (if you've got five different types of paper to choose from then you really can't use terminology which ambiguously covers three of them when recommending a choice). Still, we got there and the site helpfully emailed me a copy of the conversation which I kept just in case I needed to trigger the guarantee at a later date. Fortunately I've not had to test their guarantee in practice, but it was very reassuring to know that I had that safety net.

Reassuring is, I think, the key word for describing dealing with Photoworld. They know their service is expensive (as in book printing is expensive - I don't think they are expensive compared to their competitors) and is likely to be bought by people who haven't got a clue what they are doing so they do their utmost to make you feel like you're in good hands, and minimise the chances you're going to make a mess of what you're doing. One example from the site text - each book passes through 15+ pairs of hands as it is produced so it is thoroughly checked for imperfections. Regardless of how helpful this actually is in reality, it is an encouraging thought.

The only time I feared for my book while using it was when it came to finish and pay. At this point it uploads the pictures and send you off to secure payment, or crashes horribly if you attempt to use the Paypal option. This is slightly frightening when you've spent tens of hours laying everything out and proofing the book and all of a sudden it looks like it might be stuck on your desktop for all of eternity. Anyway, a switch to using a credit card bypassed that part of the application and it all worked fine.

The book arrived slightly quicker than promised and looks great. 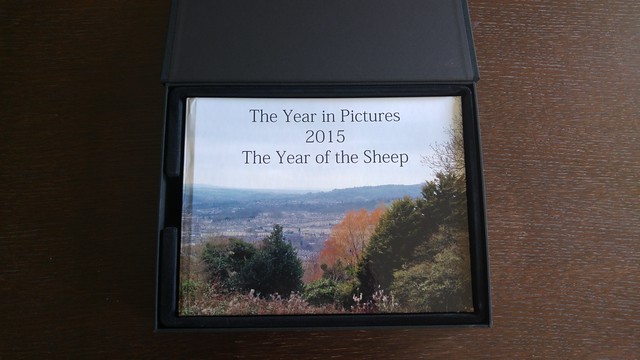 The presentational box was an extra, but looks really nice. 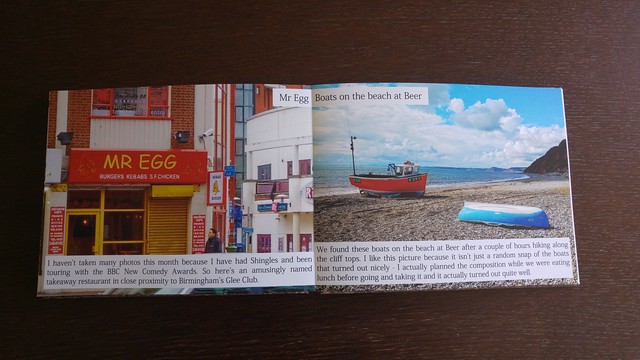 And the photos printed well. There is a notable variance in the quality of the pictures between the different photographers, but that is to be expected, reflecting the different cameras in use.

And a big thank you to Kirsty Davey for proof reading it and correcting my mistakes. If she had a web presence I'd link to it.