Show & Tell and why it helped people be awesome

In a previous life, I worked in the Digital team at the University of Bath. For many years we ran a fortnightly Show & Tell event. It was awesome, people got a lot out of it and since I've gone through this a dozen times in the last couple of months I thought I'd write it all down.

The format was a little more formal than other S&T sessions I've seen - more like conference lightening talks. Each week there would be five speakers, each talking for around five minutes with some time for questions. The speakers usually spoke over slides, although they didn't have to do so, and it was supposed to be unpolished so preparation didn't take too long.

The meeting itself ran every fortnight and was open to anyone who had an interest in the work of the Digital team. Most speakers were from the Digital team, but we had guest speakers from across the university. This was a great thing for the Digital team - aside from showcasing the work we were doing to colleagues from around campus, it also put faces and humanity to the faceless mass of "the team". It helped us start build personal relationships with those whose lives our work was affecting. They could see the challenges we faced and hear the reasoning behind the decisions we made.

The attendees benefited for these same reasons. They found out about developments in a personal way and could ask questions, raise concerns and influence the direction of progress in a safe environment. Aside from this, I'm confident everyone who attended (and listened) learned something. We had such a range of topics - from typography to web application security - it would have been impossible to not. 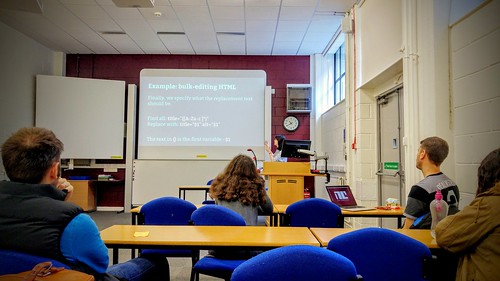 So far, pretty obvious. Treat people like humans and you foster community. Talk about stuff and people learn things. This misses the main benefit though - for the speakers.

There is an art to public speaking. It is an important skill for anyone who wants to be in a position of leadership and one that is quite difficult to practice. Firstly there is having the confidence to stand in front of a group and speak. People, understandably, find this very uncomfortable and avoid it which is very easy to do until suddenly not only you can't, but it's important you're good at it. By that point it's too late. Events like our Show & Tell give a safe environment to practice - an environment where it really doesn't matter if it all goes horribly wrong and others are around to bail you out if it does.

There is more to speaking than just having the confidence to stand in front of a group of people. Being an engaging speaker means having some vocal control to project well into the room, relaxing your body to give an air of confidence to your words and embracing the odd gimmick to keep things interesting. 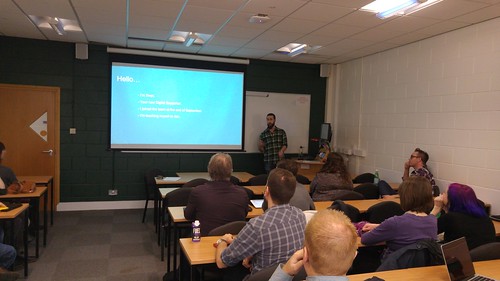 Then there is the way your message is put across. That means structuring the story in an engaging way, thinking about what the audience wants to hear and in what order to clearly convey a point, and how to support that narrative with slides where necessary. These skills are about constructing an argument in a logical way and bringing your audience with you, especially when that audience may not share the same background and skills as you - such as explaining cross site scripting to a non-technical audience. They are very similar to the skills I mentioned when I wrote about blogging last month.

That's three benefits in without any mention of the subject of a talk. As I said in a previous post, being forced to speak regularly means constantly finding new topics and this makes you ask questions about ongoing work. What is happening? Why? Why is this interesting? These are good questions to be asking anyway for keeping the projects honest. Everything has a purpose - if not, why are you doing it? If the work is boring, what is the context? Someone cares about the thing you're doing and it is a very useful skill to be able to understand that perspective and be able to convey it to other people. Talking about your work also helps highlight the positives to you, which will help you be happier day to day.

Talking about any topic requires a certain amount of analysis of the subject. Although we kept our talks informal, there was still research to be done. Usually that was the depth of research required to deliver whatever underlying work was the subject of the talk and then the preparation became an opportunity for reflecting on the process. On a few occasions we gained a great deal of insight on something we were doing through preparing talks - in fact our content modelling process was formalised through an attempt to visualise it to others. Backwards at times, but effective.

I ran Show & Tell at the University of Bath for three years and in that time delivered more than fifty talks, on top of the intro and exit speeches each time. I had to learn how to pull a talk from nowhere, and I had to learn how to write that talk very quickly and how to prepare slides at speed (pro tip - if you draw on a white board it's different and interesting, and you don't need to prepare slides in advance). I learned how to face a room full of people without fear, and I learned how to fill space while others were setting up their presentation (aka stall in a semi-entertaining way) I'm not going to claim I'm an expert at any of the above, but I'm certainly better than I would have been without this practice. For a final benefit, I spoke about this at length at my last job interview - and yes, I did get it. 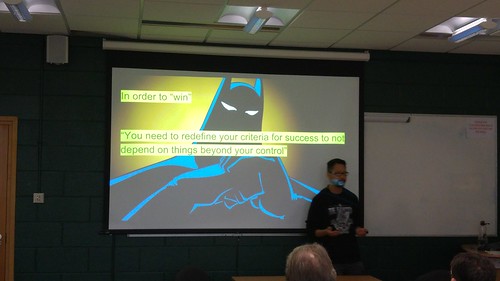